On May 2, at the Hala Ludowa in Wroclaw, there was a concert of one of the three best djs in the world, which is: ARMIN VAN BUUREN. He came to Poland for the first time, where he played a 4-hour set especially for you.

We have prepared, as always, a wonderful, hot night, so that again thousands of clubbers could be incredibly entertained with fabulous light effects, pure sound quality and artistic setting. 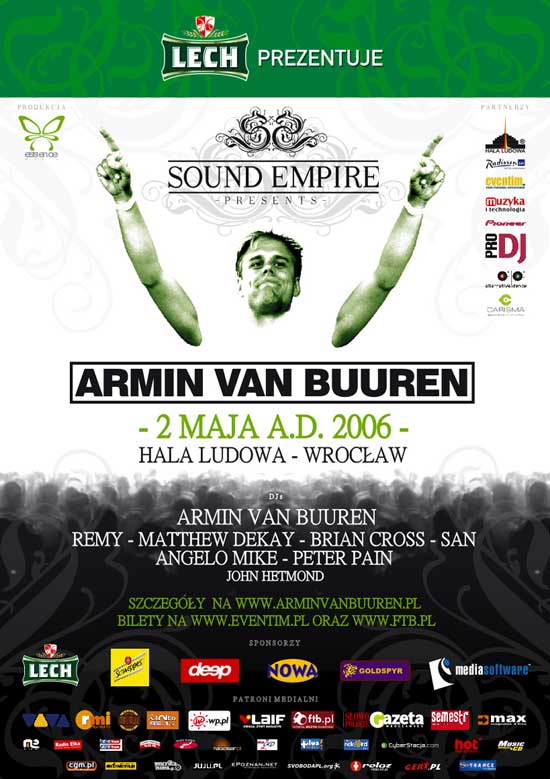 The entire DJ composition of the main stage was:

ARMIN VAN BUUREN has been in this place for the third year in a row, so there is no way that it would be a coincidence. And he is considered by many to be the best DJ. The top ten ahead of such stars as Ferry Corsten, Sasha or Carl Cox and before him are only Tiësto and Paul Van Dyk. Year 2005 also brought him two other important prizes given away at the famous Miami Winter Music Conference: for Best Radio Program and Best Compilation – “A State Of Trance 2004”. He was interested in dance music and production from an early age, which resulted in the fact that his first songs proved to be hits. This happened with the famous “Yet Another Day” and the legendary “Blue Fear”. A year has passed since the release of the first song and the Dutchman already had his first album “76” (2003). Add to this the brilliant remixes of such productions as “King Of My Castle” Wamdue Project, “Janeiro” Solid Sessions or “7 Cities” Solar Stone. Armin’s talent practically exploded, flooding the entire
dance scene with genius. Last summer, he released the second album “Shivers”, which showed that he can not only afford music on the dance floor. The album draws inspiration from rock and pop, thanks to which Armin has found new fans who do not
necessarily like trance music. Armin also includes the famous record labels Armada and Armind, as well as the aforementioned A State Of Trance programs, which are heard by people all over the world thanks to terrestrial and internet broadcasting. That
night Van Buuren will be accompanied by three other Dutchmen: dj Remy, Matthew Dekay and San, Spaniard Brian Cross and our home celebrities – Angelo Mike and Peter Pain

Remy has been a pillar of the dance stage for years – he performed in the iconic Twilo, at Bedrock’s John Digweed events and won the Netherlands Best DJ titles in 2001 and 2002. No matter if he plays tech house, techno, progressive or trance – the
common denominator of all his sets is unbelievable energy that passes clubbers around the world. It is hard to imagine electronic music without its timeless productions, including “Mess With Da Bull”, “Backstabber” and coming from the great album “Bang!”: “Scrambled” and “Dustsucker”.

In turn, Matthew Dekay is a representative of the younger guard. Younger, does not mean less known. It is difficult to find a progressive enthusiast who would not know hits like “Higher Thoughts”, “Bad”, “God’s Answer” or the illegal remix “Intergalactic” Beastie Boys. Among his fans, he has names like The Neptunes, Sasha, Deep Dish and Sander Kleinenberg and the performances come from all over the globe. The position of the Dutchman was additionally strengthened by the great two- disc compilation “Trousy” released last year

Iberian accent of this event, Brian Cross, recently won the title of the Best DJ of Spain, is a resident of Armada in Amnesia in Ibiza, where he regularly plays with Armin, Markus Schulz and MIKE, and compiles with such celebrities as Marco V , Chus & Ceballos and Wally Lopez. Brian is also the first DJ whose name will be signed with the Technics vinyl bags line.

The third Dutch in the line-up is Sander Jongerius, who in the time when he co-founded Solid Sessions released the famous song “Janerio” and alone as San released the greatest pieces of “Sunday” and “Mechanical People” played by the biggest figures in the DJ world. He earns the most publicity, however, thanks to his talent in mixing records, which is appreciated by the public of the clubs where he is a resident: the Indian Elevate, Bucharest Kristal and monthly events in Malta. Among Sander’s fans, apart from “plain” clubbers around the world, we also have someone like John Digweed, who said about Sana: “amazing dj with excellent skills”. It is difficult to provide better.

No assurance or confirmation of the highest quality is definitely needed by Angelo Mike, who has been in Poland at the top of the DJ hierarchy for years and for the time being is not going to change it. Well, unless performances in the world become so frequent that appear on the Vistula River will be only for family holidays. This may happen because Angelo is the first Pole who performed on the legendary Mayday in Dortmund, played on Soundtropolis near Berlin, on Nature One in Pydna and in Prague’s Creamfields, and those are only the most remarkable of his foreign journeys.

Peter Pain began his DJ career in the mid-90s. As TB Locke, he was heavily involved in the development of the minimal scene. Being a radio presenter, dj and producer, he came very close to the Polish stage of progressive trance / hard trance. In mid 2005, a new pseudonym was born. We present – Peter Pain, playing from progressive, wandering around the UK uplifting and ending with hard trance.

With such a set of stars, supplemented by an extremely powerful support and a spectacular visual setting, it is impossible to imagine a better place for “active rest” after the labour day than the Hala Ludowa in Wrocław!