The tradition awaited by lovers of great fun have become ATB’s unique performances. This well-known DJ is very happy to visit our country. This year, the ATB’s, Andre Tanneberger’s, event took place on
November 24, 2007 at the Poznań Arena Hall.

As usual, a unique stage design has been designed, complemented by a rich technical setting – so you can be sure that it will be another great show that will remain in your memory for a long time! 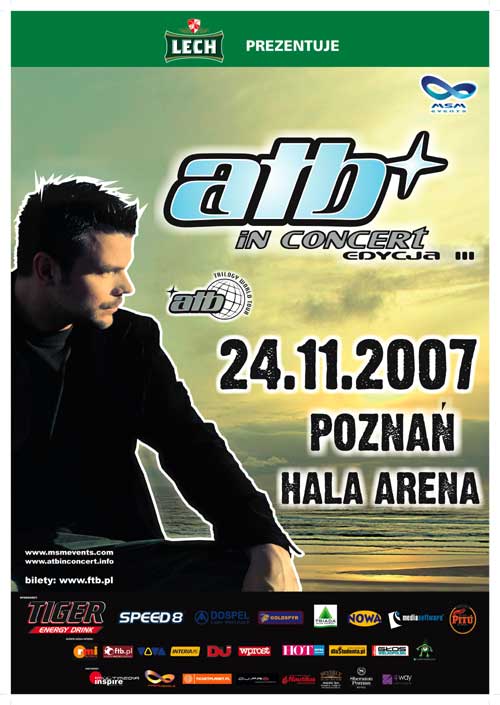 ATB alone, thanks to his first hit “9 P.M. (Till I Come) “became one of the most recognizable DJs in the world, the song hit the top positions on the European charts. The same happened with the song “Do notStop”, which by the way was on the list of the best-selling singles in Europe.

Andre gained great popularity and became recognizable, which few artists manage in this industry. The success of “three strokes” (“9 P.M.”, “Do not Stop”, “Killer”) inspired him to record the first album “Movin ‘Melodie”. It was released in 1999 and turned out to be a musical event.

In his production output he has the following albums: “Two Worlds”, a two-disc album – “Dedicated”, “Addicted to Music”, “No Silence”, “In the Mix”. European songs were dominated by such songs as “Feel Sou”, “Let U Go”, “Hold You”, “You’re Not Alone”, “Marrakech”, “Ecstasy” and “Here With Me”.

The official premiere of the new album under the name “Trilogy” took place on April 27 this year, it is the eighth album in the work of ATB. Already three weeks after the premiere of the album, it turned out that ATB music in Poland is very popular. “Trilogy” quickly gained the status of a gold plate.

The single promoting the album was the song “Renegade”, in which Heather Nova gave a guest voice.

Along with the world premiere of the album “Trilogy” on April 27, ATB appeared as one of the main stars of the great gala of the Eska Music Awards in Łódź. He received gold and platinum records at the ceremony, confirming the artist’s incredible popularity in our country.