On December 8th, one of the most famous rappers in the world, 50 Cent, appeared for the first time in Poland.

The 50 Cent performance took place on December 8 at Warsaw’s Torwar and was part of the European rap tour, which began on November 4 in Ireland and ended on December 17 in Paris. On the map, apart from concerts in the largest halls of England, Germany, Austria, Switzerland, Spain, Belgium, Holland or Scandinavia, Poland was also included. On the whole tour promoting the artist’s latest album, the Polish concert is quite elitist, because compared to other halls in Europe, it took place in a much smaller, than in other countries, object. 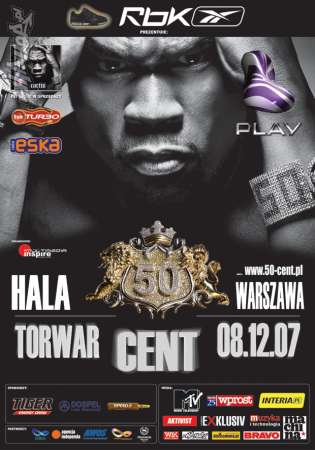 For hip-hop fans, this was an event of the scale such great as the Stones’ concert 40 years ago. Here is the artist who is at the top of the world bestseller lists. The protege of Eminem, who before the release of the first album, popularly beat his master. 50 Cent is not only music, fame and huge cash, but also the legend of the “bullet-proof tough guy” – the son of a murdered drug addict, convicted drug dealer several times, then a promising rapper who has been shot several times before his debut.

The last record in 50 Cent’s output is Curtis, which appeared on September 17th. The artist will promote this release during the tour. There are 17 tracks on the disc. In the recordings of Fiddy, his supported guests included: Justin Timberlake, Akon, Mary J. Blige, Robin Thicke and Nicole Scherzinger from The Pussycat Dolls. Among the producers there were, among others Dr. Dre, Timbaland and Eminem.